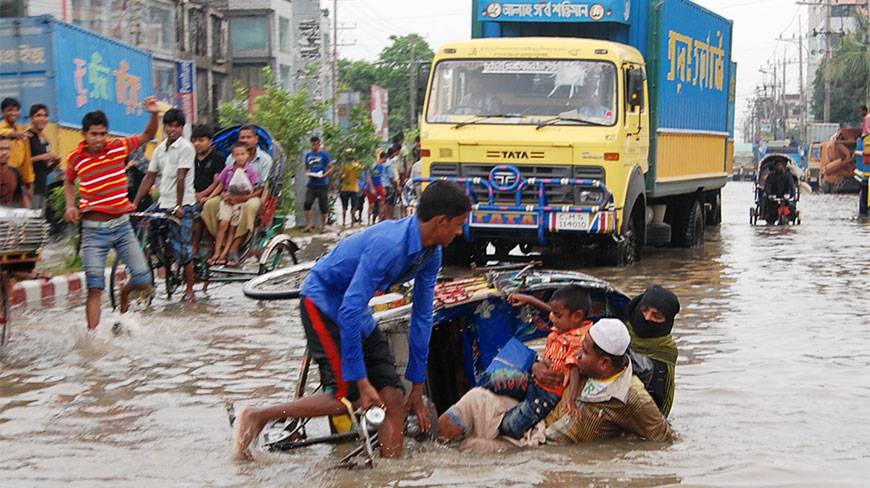 People suffered immensely yesterday as the low-lying areas of Chittagong city went under knee-deep water due to the continuous heavy rainfall, which started as a shower in the early hours of Friday.

A construction worker died and three others sustained injuries falling under the collapsed boundary wall of an under-construction building at Hillview Residential Area under Panchlaish Police Station in the city at around 3:30am.

Fire brigade officials said the newly-built boundary wall of the under-construction building collapsed as the uncovered boundary wall had absorbed the excessive rain water in the last two days.

Panchlaish police station Officer-in-Charge Abu Jafor Mohammad Omar Faruk said Aslam, 30, and  Md Mamun, 18, Shefajul, 20, and Mohammad Khokon, 22, were sleeping in a makeshift house close to the boundary wall at about 3am, when it collapsed.

Assistant Sub-Inspector Pankaj Barua of CMCH Police Camp said the on-duty doctors at CMCH declared Aslam dead when he was taken to hospital while the remaining three were undergoing treatment at the hospital.

The shower that started in the early hours of Friday, later turned into a heavy rainfall and continued to fall well into midday yesterday, said Chittagong Divisional Met Office sources.

The met office recorded 336.4 millimetres of rainfall in last 24 hours till 3:00pm yesterday while it was 314.2 millimetres in previous 24 hours, said Mirza Nilufar Jahan, meteorologist of Meteorological Office in Chittagong city’s Patenga area.

She said the rainfall might continue for a few more days under the influence of a low pressure formed in the Bay of Bengal.

Motorised vehicles were hardly seen in the areas while rickshaws and vans were seen plying on the city roads.

Commuters, greatly outnumbering the rickshaws, had to suffer quite a lot through filthy water from overflowing roadside drains. Offices and different educational institutions-bound people however faced water logging problem mostly.

Omar Faruk, a businessman and resident of the city’s Agrabad area, told Dhaka Tribune that he could not use his private car due to water logging on the road and reluctantly, he had to pay an excessive rickshaw fare.

He blamed the poor sewerage and drainage system of the city for the water logging.

Bonny Mutsuddy, a resident of the city’s CDA Residential Area, said she could not go to her university as filthy drain water had flooded roads because of the nonstop rainfall.

Abdur Rahim, public relation officer of Chittagong City Corporation (CCC), said some areas had gone under water but the city corporation authorities were working to solve it.

CCC Mayor M Manjur Alam could not be reached on the phone to talk over the matter. It may be mentioned here that the present mayor gave words to port city dwellers to remove water logging problem during CCC election campaign four years ago.

Mohibul Haq, director (admin) of Chittagong Port Authority, told Dhaka Tribune that four vessels which were scheduled to leave the port jetties remained stuck in the morning while two other vessels could also not reach jetties from the outer anchorage.

“The ship movements at the port channel have been suspended temporarily from 7:00am till the noon due to torrential rain,” he said.

The loading and uploading of the goods at the port jetties and outer anchorage had also remained suspended during the period because of heavy rainfall, he added.

Maritime ports of Chittagong, Cox’s Bazar, Mongla and Payra were advised to keep the local cautionary signal number three hoisted. All fishing boats and trawlers over the North Bay were advised to remain close to the coast and proceed with caution till further notice.

Under the influence of strong monsoon over the North Bay, the low-lying areas of the coastal districts of Cox’s Bazar, Chittagong, Noakhali, Lakshmipur, Feni, Chandpur, Barguna, Bhola, Patuakhali, Barisal, Pirojpur, Jhalakathi, Bagherhat, Khulna, Satkhira and their offshore islands and chars are likely to be inundated by 1-2 feet height above normal astronomical tide.

As there was the possibility of a mudslide in the port city due to heavy rainfall, the district administration had started a campaign over loud speaker asking the hill-side dwellers to go to a safe place like nearby school building and cyclone centre, said Additional Deputy Commissioner (Revenue) Abdul Quader of Chittagong district administration.