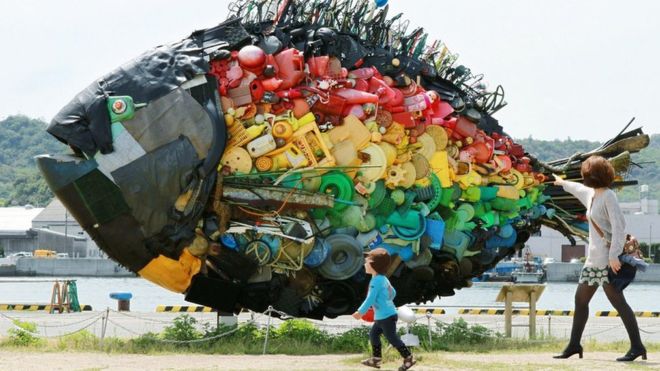 A recent claim that there will be more plastic than fish in the sea by 2050 was intended to highlight a pollution crisis in the oceans. The problem really does exist, but do the figures hold water, or is there something fishy going on?

The prediction was made by the Ellen MacArthur Foundation and the World Economic Forum, in a report called The New Plastics Economy, which looks at the amount of plastic that ends up in the sea.

It got a lot of coverage in the press, including the Guardian, the Washington Post and the Daily Telegraph, among others.

One of the big headlines from the report was that if we continue dumping plastic in the sea at the present rate, measured by weight, there will be more plastic than fish by 2050.

This raises two questions: how do you measure the plastic, and how do you count the fish?

The report acknowledges that it is difficult to be precise. For the plastics, it refers back to a study led by Prof Jenna Jambeck of the University of Georgia, published last year. She tried to carry out a global census of plastic pollution and to estimate how much ends up in the ocean. Her study looks at estimates for total waste in all non-landlocked countries, and then estimates how much of that waste is likely to be plastic, how much of it is recycled, and so on.

But to estimate how much of this plastic then ends up in the sea, the study examines just one area – San Francisco Bay. “If that’s not representative of the rest of the globe then you can see the potential for large deviations in this calculation,” says Prof Callum Roberts from the University of York.

What the Ellen MacArthur Foundation report does is to take Jambeck’s research, which makes predictions only up until 2025, and project it forwards to 2050. So how much plastic will there be in 2050?

Surprisingly, for such an important number, this is not spelled out in the report, though it is implied there will be a total of 750 million tonnes of plastic in the ocean by then.

What about the fish estimates? The report never states figure for the expected tonnage of fish in 2050, and cites no research into fish populations.

However a diagram in the report does show a plastic to fish ratio of “greater than 1:1” by weight in 2050. 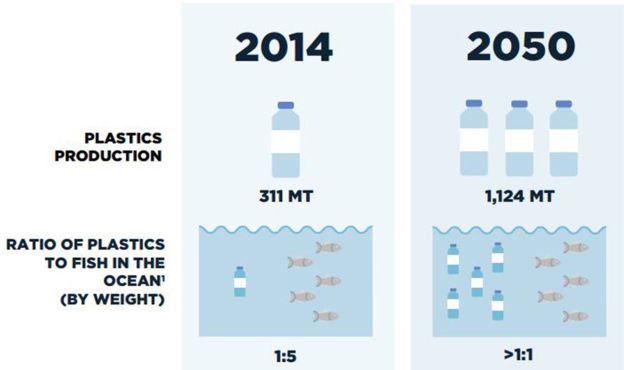 When asked by the BBC about its numbers the Ellen MacArthur foundation sent a document titled Background To Key Statistics, and issued a new version of the report – published on 29 January – both of which contain new figures (none of the authors of the report were available for interview for this story). The Ellen MacArthur Foundation’s updated figure for fish in the sea in 2050 is roughly 899 million tonnes.

But it also increases its estimate for the amount of plastic in the ocean in 2050 to between 850 million and 950 million tonnes, or about 25% more than originally predicted. So although there could be slightly more plastic in the sea by 2050, according to these figures, the ratio remains roughly 1:1.

But here is the real problem. Counting fish is a tricky business – they are slippery blighters.

The new numbers for fish tonnage that the Ellen MacArthur foundation has cited are based on a 2008 study led by Simon Jennings from the Centre for Environment, Fisheries and Aquaculture Science. His team used satellite imagery to measure the extent of microscopic plants known as phytoplankton in all the world’s oceans. Because these tiny plants are so abundant, they alter the surface colour of the ocean over large areas, and these changes can be viewed from space.

And because almost the entire marine food web is ultimately dependent on phytoplankton, this data can be used to create an estimate for the total tonnage of fish living in the ocean. It is this work that the Ellen MacArthur Foundation’s figure of 899 million tonnes of fish comes from.

However, last year Simon Jennings revisited his study and came to a very different conclusion. He told the BBC that he now thinks that phytoplankton could potentially support much, much larger quantities of marine life than previously thought.

His new study does not distinguish between fish and other marine predators, but it concludes that there may be between 2 billion tonnes and 10.4 billion tonnes of marine creatures in the oceans. “We’re not absolutely confident in our methods to determine what proportion of this is fish at the moment,” says Jennings. “It’s a very uncertain number to predict.”

The Ellen MacArthur Foundation’s revised predictions for plastics also deserve further attention. Jenna Jambeck, who led the study into plastic pollution that was cited, told the BBC that she would not feel confident projecting her work forward beyond 2025 to 2050.

So how much plastic is there in the ocean, and how much will there be in 2050? We don’t know, but probably a lot. How many fish? We don’t really know but certainly a lot. And when will one overtake the other? We definitely do not know. But it does point to a very real problem. We do know that plastic, once added to the ocean, does not decay for decades, possibly centuries. It is constantly increasing.

Tags: save the future, save the world